By visiting our site, you accept the use of cookies. That enables us to provide you with personalized content and offers tailored to your interests but also for statistical purposes. However, you can change your cookie settings any time.
I ACCEPT / OK! CONTINUE
LEARN MORE ABOUT
En savoir plus sur les cookies
I ACCEPT / OK! CONTINUE
Tweet
A node is simply a crossroads identified by a number and a signpost. It guides your route by indicating the direction to follow. Before leaving on the Bicycle Nodes Network of Liège Province, identify the number of the starting node (the crossroads) and note the numbers to follow to complete your journey. You can also define an itinerary with a different arrival point than the departure point. The average distance between each node is 5 to 8 km. Calculate the kilometres to be covered and adapt your itinerary according to your wishes.

Did you already notice the presence of several types of signs while biking around Eastbelgium? No worries!
Major signage work is currently underway on the "VéloTour" network. Among the 850 km of existing bike paths, some sections will be modified. Little by little, the new green and white signposts on the provincial network are replacing the former Vélotour ones (see illustration below). As a result, some numbers will also change.
Remember to check your route before you set off by way of the route planner or by contacting the Eastbelgian Tourism Agency under +32 (0)80/22.76.64. 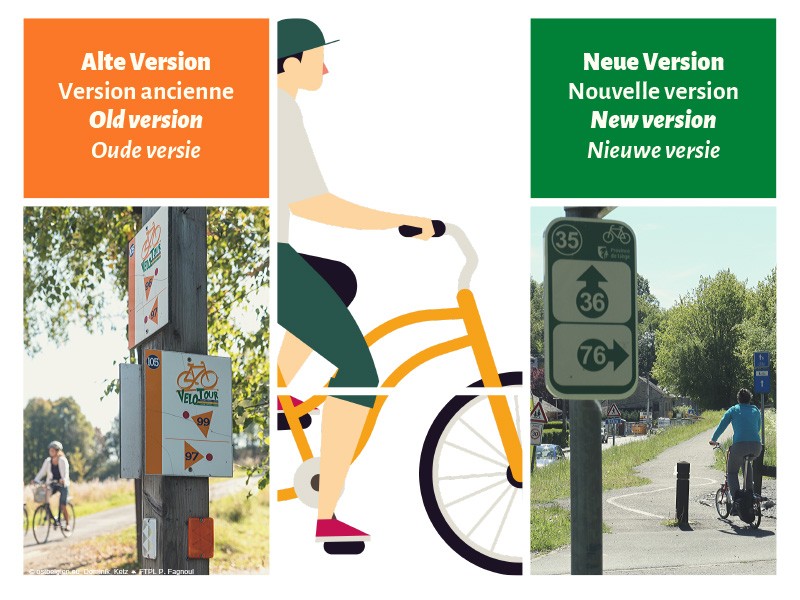