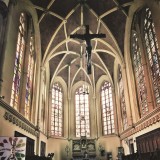 "The religious art treasure of the old Collegiate Church at Visé includes several works of art, the principal one being the shrine of Saint Hadelin dating from the 11th century (the two side walls) and the 12th century (the two long sides of the reliquary). There is also the saint's bust made in the 14th century (the head is made of polychrome wood), and restored in the 17th century (the bust: shoulder) by the goldsmith Goesin. There is also a pelican lectern, and a stone slab made by the great sculptor Jean Del Cour... Saint Hadelin was one of the many Christian missionaries coming from Aquitaine in the 7th century. He followed his companion Remacle in his evangelical work in the Ardennes. To his master we owe the foundation of the abbeys of Stavelot and Malmédy, and along with Hadelin, Cugnon abbey. The main mission of Hadelin himself was the foundation of the community of Celles (near Dinant). The Romanesque church in this place was consecrated in 1047 by Bishop Wazon of Liège at the same time as the first shrine (of which remain two side walls with the warrior Christ vanquishing evil and Christ the judge crowning Remacle and Hadelin). The long sides date, by means of iconographic and technical comparison, from the third quarter of the 12th century, during the golden age of Mosan art. Eight chased silver reliefs recount the religious life led by Hadelin, as written by the Vita Hadelini (produced in the year 1000 or thereabouts). The vision of the dove assigning his mission (1) followed by the blessing of his master Remacle (2), and the backing of the lordly authorities of the day with the visit of Pepin of Herstal, come to ask him for an audience (3). Encouraged by this support and the lands granted to him, Hadelin was able to found a community, and he received his first disciples(4). The second long wall shows the feats achieved in the environs of Celles (from the name Cellae... grottoes in the Lesse valley). The rural world with its worrying calendar of weather is reassured by the miracle of the spring, gushing from the earth at Franchimont (Philippeville)(5). This is undoubtedly the finest relief in the shrine, imitating the superb style found on the fonts of St. Barthélémy in Liège. The urban world with the neighbouring city of Dinant is concerned with the physical ills and the healing of a dumb women(6). The world of the nobility is called upon with the resurrection of Guiza, a lady of noble lineage who wished to make a gift of her fortune to Hadelin. She came back to life, when Hadelin entered, and gave this gift material form by handing him a glove (7). The end of this adventure as experienced by Hadelin is the death and placement of his body in a sarcophagus (in 690) (8). The first church at Visé apparently dated from the 8th century, but it could well well be older. It is said that Berthe, a daughter of Charlemagne, is buried in it. This parish church dedicated to St. Martin would see its status develop into a collegiate church, at the arrival of the chapter of the canons of Celles, in 1338 bringing the precious reliquary of their founding saint, eager to thereby escape from the violent acts of the local lord of Celles-Vêves. A small town, newly encircled by stout walls (1330) welcomes them and offered them almost one quarter of the area needed for the installation of their cloister (with sacerdotal immunity). Damaged during the passage of Charles the Bold (1468), and by iconoclasts (in the late `16th century), at the moment of the destruction of the city walls in 1675 by the armies of Louis XIV and at the beginning of the 20th century by a fire set by the German armies on 10 August 1914. It was rebuilt in 1924-1935 by the architects Jamar and Deshaye in the Gothic style. The wall of the primitive choir (16th century), which is listed, has been maintained. The Romanesque tower and the neo-classical naves have been completely replaced. The church is in the process of being restored, where its choir and stained-glass windows are concerned (late 19th century). There are one or two items within the confraternity of Notre-Dame de Lorette and St. Hadelin."
CLOSE
Error: form validation
Contact
Phone : +3243748563
Mob : +33 +32492766689
Email : info@museedevise.be
Website "Trésor de la Collégiale de Visé"
Place de la Collégiale
Collégiale Saint-Martin & Saint-Hadelin de Visé
Visé
4600
Visé
Write a message