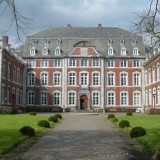 In 1209, the count of Moha gifted the land in the Rodum Valley to the Cistercian religious community who built the Val Notre-Dame Abbey. The Mehaigne river, agricultural land and woodland allow the order to live self-sufficiently. In the 13th century, the community shone spiritually, it increased its land ownership in Hesbaye. It received tithes from around thirty villages and numerous contributions from noble families in the Hesbaye area to which the majority of the nuns belonged. Two abbesses were particularly involved in the urban developments of the abbey. Their buildings constitute today the jewel of the ensemble. In the 17th century, Nicole de Waha had the monumental entrance porch, dovecote and the cloister gallery built. In the 18th century, Lutgarde de Boileau built the elegant Abbess' quarters and the St. Michael wing. After the French revolution, the estate was sold as a national asset. In 1902, the sisters of the Assumption opened a boarding school for young girls. They built the art deco inspired chapel in the 1930s which replaced the church destroyed by a private owner at the end of the 18th century. Since 1984, the school has been managed by secular staff.